Creativity and Quirks at Work 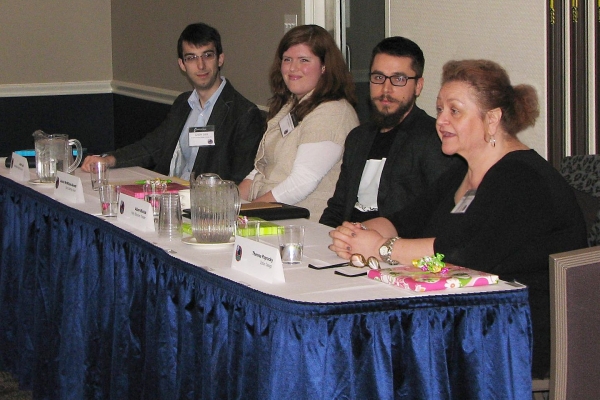 In creative fields, staying power is about staying unique. And if you know Zoltun’s Director of Creative Services, Theresa Poprocky, you know that it is her distinctive approach to design that has helped maintain her status in the industry for 39 years and counting. Theresa’s success in the field made her a natural panel member at this year’s Creativity at Work conference, held last Thursday, April 3, at Robert Morris University. At the event, she joined a group of four leaders in the design and multimedia fields, and 12 other standouts from creative industries such as photography and video production, to speak about her career and give advice to rising graduates.

Theresa advised her audience to find what makes their work unique, and own it. A designer’s quirks are what set them apart, and what no one else will have. When asked how she keeps up with trends, Theresa responded that she doesn’t. If the industry says pink is the “it” color of the year, she chooses her own path and picks purple. For students about to enter a competitive and intimidating workforce, Theresa’s focus on representing individuality, rather than molding to a potential employer’s vision, left a lasting impression. In the week since the event, she has received numerous messages from RMU students and faculty thanking her for her impactful advice.

So how did Theresa distinguish herself among 16 big names in Pittsburgh’s creative scene? By following her own advice to the audience—embrace your quirks. When asked to describe the most important project of their careers, other panel members chose the biggest projects, or those that won the most awards. When it was Theresa’s turn, however, she spoke about a much different type of assignment: a black-and-white magazine that she worked on as a Creative Director at UPMC. For the magazine, she interviewed patients in the ICU, many of whom did not live long enough to see their articles published. This project stands out to Theresa not because it was her best design work, but because it reaffirmed why she is in this business: to connect with others and get down to the heart and soul of each and every project. It’s that heart and soul that makes Theresa such an important member of the Zoltun team, and why we’re proud that she was able to share it with the emerging quirky designers of the industry.