Heinz and the North Shore 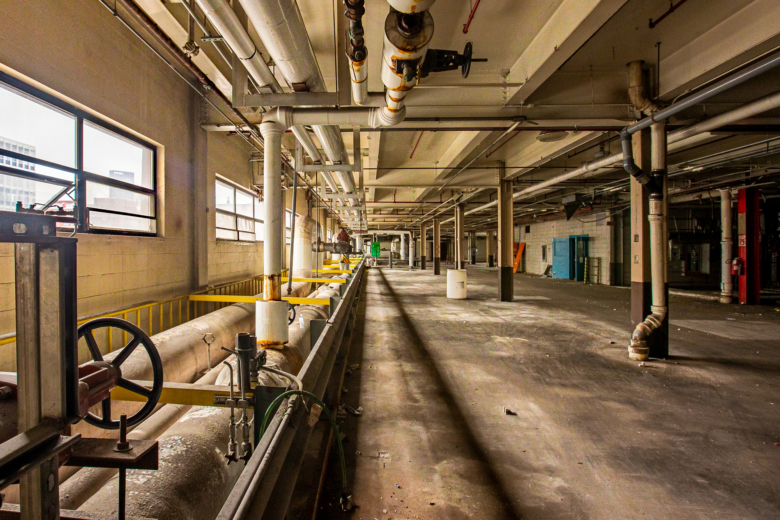 The Heinz Company set up operations on the north bank of Pittsburgh’s Allegheny River in 1876. Beginning in 1907, they started construction of their historic industrial complex that consisted of eleven buildings. Most buildings remained operational until 2001. That’s when Heinz moved operations to the east side where a new 70,000-square-foot warehouse was built.

Heinz has since sold their north shore operations and ownership has changed several hands leading up to the plant’s eventual shut down in 2019. Today, there’s an eerie hollowness to the warehouse. Most of the old equipment has been removed and sold off. However there are still remnants of what once was: palettes of soup cans, sealed buckets of pickle juice, giant boxes of ground wheat.

The Power Building, part of the original complex which opened in 1914, is a visual echo of what took place in the mid-1900s. Vintage canning machines are sporadically located on different floors. Retired hard hats hang loosely on a chain-link fence. Lower ceilings with complex plumbing connect like a spider’s web from end-to-end.

Some of us have a family history here. I recently learned that my grandfather was employed for a short time making ice cream. It’s incredible to think of the multitudes who have crossed this path. Some might have spent the majority of their adult lives on the floors of these buildings. This is where they made their mark. It was a big part of their identity as a Pittsburgher. But they’ve all moved on. Heinz has moved on as well. Yet the complex remains. You can find it listed on the National Register of Historic Places as the H.J. Heinz Company. While a current stillness is evident in the photos, a great energy still rises from the faded walls of a enterprise that will forever be woven into Pittsburgh’s rich history.