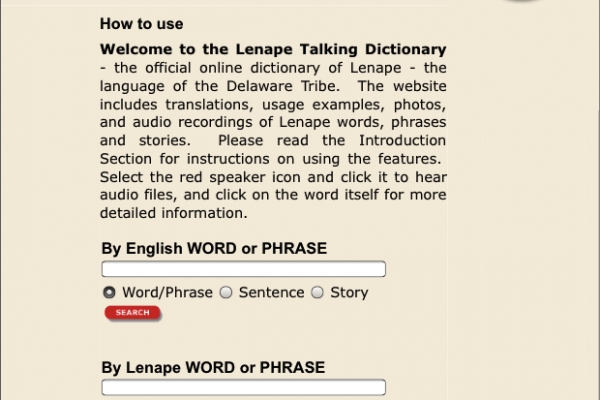 Kata hàch alënixsi? Do you want to learn to speak the Lenape language?

No, there is no native speaker of the centuries-old language on the Zoltun team to teach you, and sadly, none remain. But because of Zoltun’s work on the Lenape Talking Dictionary website, anyone can learn about the language and culture of the Lenape Native American people.

The Lenape (or Delaware) Native Americans originally lived in territory along the Delaware River and in present-day New Jersey, eastern Pennsylvania, southeastern New York, and northern Delaware. Following the American Revolutionary War and displacements by new American immigrants, they were forced out of their homeland and relocated several times. Before settling in Indian Territory (Oklahoma), they were moved to western Pennsylvania, Ohio, Indiana, Missouri, and Kansas. Today, the main concentrations of Lenape people are in Oklahoma, Wisconsin, and Ontario.

Since 2011, Zoltun has worked to update and maintain the Lenape Language Preservation Project’s website, which was funded by a grant from the National Science Foundation in 2002. As explained on the site, in just 400 years, the number of speakers of Lenape as a first language dropped from thousands to zero. However, thanks to written and recorded contributions from the last native speakers of the language and the continued work of members of the Preservation Project, the language will last forever.

For a crash course in Lenape 101, visit talk-lenape.org.

To learn about the history of the Lenape people in Indiana, visit http://www.lenapeonthewapahani.org/ for a short video produced by students at Ball State University.