What’s so terrible about a towel?

The Terrible Towel, invented as a gimmick by Pittsburgh legend Myron Cope, made its debut at the 1975 playoff game between the inimitable Pittsburgh Steelers and the then Baltimore Colts. 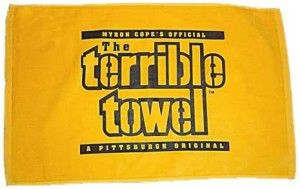 Cope wanted  something to rally Steeler fans, but it had to be something small, portable, and something that every Pittsburgh fan already owned.  “Bring a yellow, black, or gold towel to Three Rivers Stadium on the Sunday,” said Cope. “if you don’t have one, buy one. And if you don’t want to buy one, dye one.”

Pittsburgh fans didn’t disappoint – the Steelers won the playoff game 28-10 and 36 years later, the Terrible Towel has evolved into  the best-known fan symbol in professional sports. The sea of gold in the stadium is a visual sign of support for the Steelers and a distraction to the poor team being embarrassed by them.

The towel is more than simply a towel, of course. Myron Cope gave the rights to the Terrible Towel to the Allegheny Valley School,  one of the largest care providers for mentally challenged people in Pennsylvania. The school benefits from a portion of the Terrible Towel’s profits.

“There is only one Terrible Towel for any team in the National Football League,”  former Steeler great Lynn Swann said in one ESPN interview. “Anyone who is waving any other color, means nothing. It’s just one Terrible Towel.”

“Plus,” said Troy Polamalu, “Every great nation has a flag. Why would the Steeler Nation be any different?”

We couldn’t agree more, Troy, and we’re looking forward to seeing a sea of Pittsburgh’s  unmistakable, bright yellow rally rags in Dallas on February 6.
(Ironically, the Terrible Towel is manufactured in Baraboo, Wisconsin!)